There’s a lot of excitement in school right now over a little fox.  Foxy Jack is our school mascot, and he’s going on a big journey!

Our school has been invited to take part in a Twitter project entitled #globalpal.  Four schools from around the globe are going to exchange mascots, and find out a little bit more about what it’s like to go to school on the other side of the world.  Foxy Jack’s first trip is to Mr Webb’s class in New Zealand, in a small school in Taranaki (North Island).  After that, he’ll visit Mrs Yollis’ class in Los Angeles, USA and finally he’ll get a trip to Miss Crowther’s class in Melbourne, Australia.  And in return, we’ll have a visitor from each of those schools here at Aiskew Leeming Bar!  How exciting! 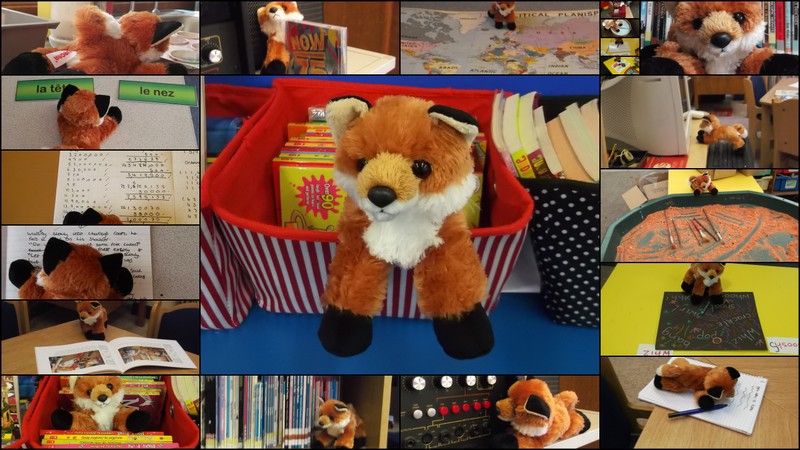 Just before he set off on his journey, Katie and Mackenzie took him for a trip around school to share our setting with our new friends around the world.  Here he is enjoying a day in the life of an ALB pupil!

How did we choose our mascot and his name?  We wanted to send an animal that represented our country, so we chose three common British mammals to decide between: a hedgehog, a rabbit and a fox.  We took a democratic vote!  To find his name, children were invited to put in their suggestions.  We liked Foxy Jack, because it used the name of our country’s flag, the Union Jack – so Foxy Jack it is!

When our first mascot arrives, we will be using the twitter hashtag #globalpal to share news and information with other schools.  Watch out for our tweets, and follow Foxy Jack’s journey around the globe!